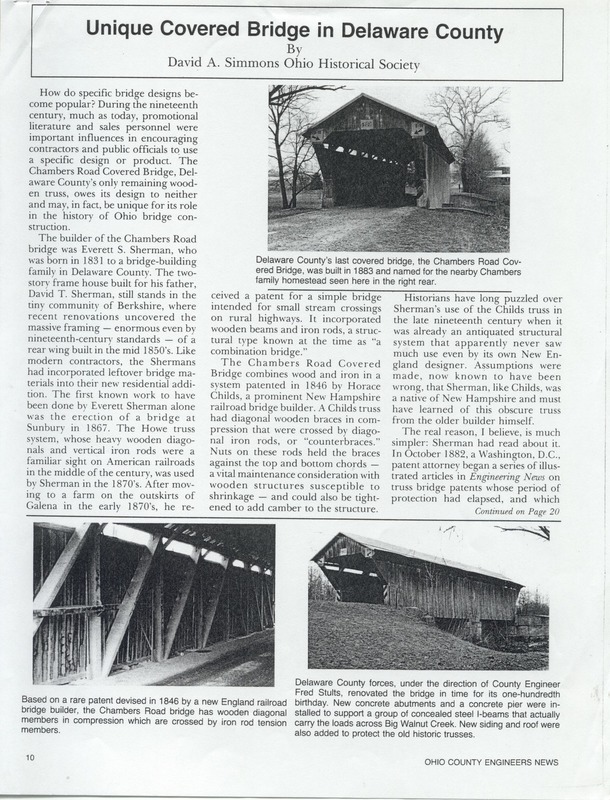 
How do specific bridge designs be-

come popular? During the nineteenth

century, much as today, promotional

literature and sales personnel were

contractors and public officials to use

a specific design or product. The

en truss, owes its design to neither

and may, in fact, be unique for its role

in the history of Ohio bridge con-

The builder of the Chambers Road

bridge was Everett S. Sherman, who

was born in 1831 to a bridge-building

family in Delaware County. The two-

tiny community of Berkshire, where

massive framing -enormous even by

terials into their new residential addi-

tion. The first known work to have

been done by Everett Sherman alone

was the erection of a bridge at

nals and vertical iron rods were a

in the middle of the century, was used

ing to a farm on the outskirts of

ceived a patent for a simple bridge

on rural highways, It incorporated

tural type known at the time as "a

ered Bridge, was built in 1883 and named for the nearby Chambers

Bridge combines wood and iron in a

system patented in 1846 by Horace

had diagonal wooden braces in com-

pression that were crossed by diago-

Nuts on these rods held the braces

against the top and bottom chords-

a vital maintenance consideration with

shrinkage - and could also be tight-

ened to add camber to the structure.


[photo: Based on a rare patent devised in 1846 by a new England railroad

members in compression which are crossed by iron rod tension


[photo: Delaware County forces, under the direction of County engineer

Fred Stults, renovated the bridge in time for its one-hundredth

birthday. New concrete abutments and a concrete pier were in-

carry the loads across Big Walnut Creek. New siding and roof were

were also added to protect the old historic trusses.]


Historians have long puzzled over

Sherman's use of the Childs truss in

the late nineteenth century when it

was already an antiquated structural

much use even by its own New En-

made, now known to have been

wrong, that Sherman,like Childs, was

a native of New Hampshire and must

have learned of this obscure truss

from the older builder himself.

The real reason, I believe, is much

simpler: Sherman had read about it.

trated articles in Engineering News on

truss bridge patents whose period of

protection had elapsed, and which 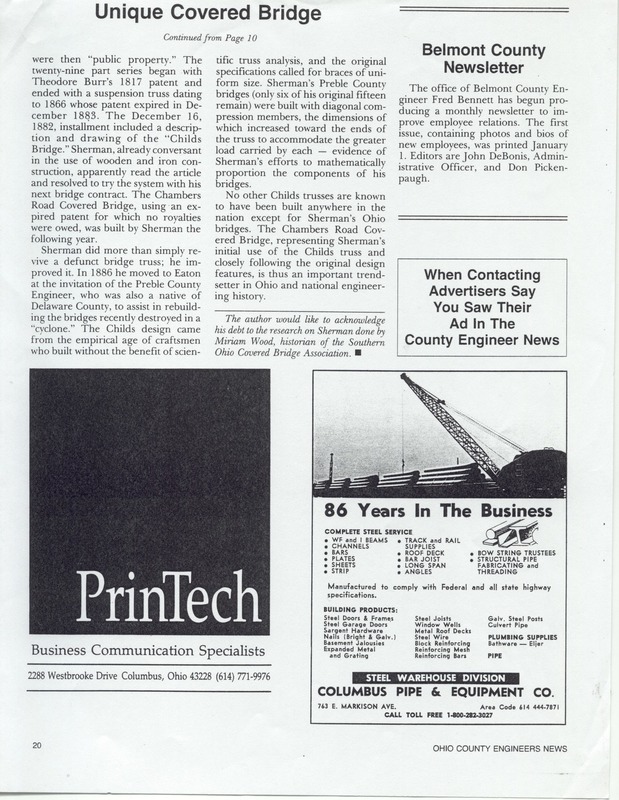 were then "public property." The

ended with a suspension truss dating

tion and drawing of the "Childs

in the use of wooden and iron con-

and resolved to try the system with his

next bridge contract. The Chambers

pired patent for which no royalties

were owed, was built by Sherman the

Sherman did more than simply re-

at the invitation of the Preble County

Engineer, who was also a native of

Delaware County, to assist in rebuild-

ing the bridges recently destroyed in a

from the empirical age of craftsman

who built without the benefit of scien-

tific truss analysis, and the original

specifications called for braces of uni-

bridges (only six of his original fifteen

remain) were built with diagonal com-

pression members, the dimensions of

which increased toward the ends of

the truss to accommodate the greater

load carried by each-evidence of

proportion the components of his

No other Childs trusses are known

to have been built anywhere in the

nation except for Sherman's Ohio

initial use of the Childs truss and

features, is thus an important trend-

setter in Ohio and national engineer-

his debt to the research on Sherman done by

Miriam Wood, historian of the Southern