The Porter Township Collection contains the Unique Covered Bridge in Delaware County, an article written by David Simmons about the Chambers Road Bridge, a video of the Porter Township School, photographs of historic homes including the birthplace of famous aviator Foster Lane. 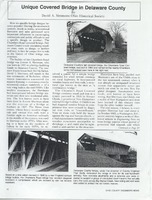 This is a photograph of the only Childs Truss covered bridge in Delaware County. The bridge is located in Olive Green in Porter Township. It is also called the Chambers Road bridge, and was entered into the National Register Information System,… 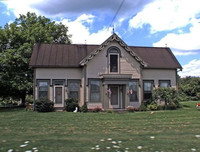 This is a photograph of a building built prior to 1901. It is an example of the Gothic Revival period (c.1840-c.1880) in western architecture, and is currently a private residence on St. Rt. 61 North in Porter Township.

This is a video of reunions taking place in various schools in Porter Township. 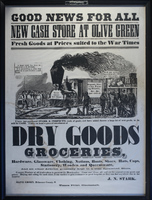 A group of people standing to the left of the tracks has this cartoon bubble over their heads:

A large stock has been received by J.N. Stark. It is… 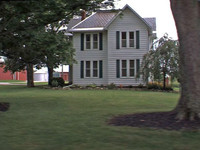 This house is described as the old Clawson House in the
"Big Walnut area: historical survey of buildings, structures, and natural items of interest in the area," published in 1993. The picture shown here was taken October 7, 2022, and is available…

This house was most likely built before 1901, and was the home of one of Olive Green's founders, Christopher Lindenberger. In 1836, Lindenberger established himself as a merchant in Olive Green. 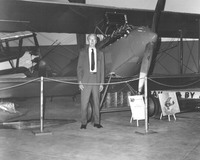 This picture shows the Seymour Chambers (1831-1912) house built in 1881. According to census records, Mr. Chambers worked as a farmer in Porter Township throughout his life. 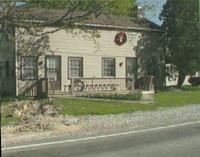 Photograph of the Blainey hotel and stagecoach stop in East Liberty on St. Rt. 656.
View all 11 items